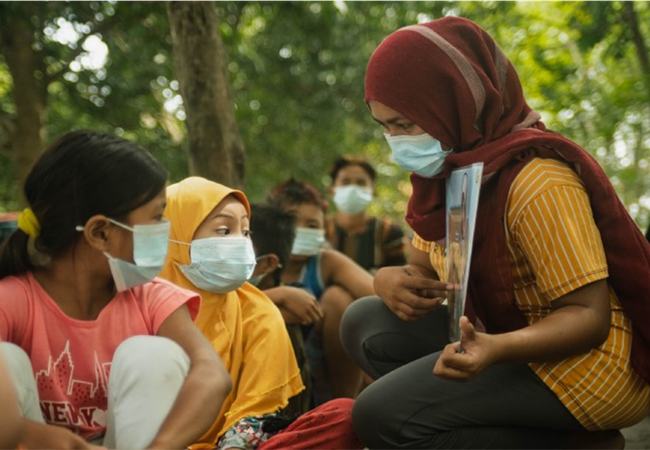 This is the way I can help my community.”

Inspirational MMH champions in the Philippines

This is the way I can help my community.”

When we rolled out Mum's Magic Hands in our Covid-19 response in the Philippines, we saw incredible people sign up to be MMH Champions and were inspired by their stories.

Gloria, an MMH Champion in Maguindanao, Philippines, teaches children about the importance of handwashing using the MMH storyboard.

Gloria, 19, was processing her passport and work papers in Metro Manila when the Philippine Government declared a nationwide lockdown due to the Covid-19 pandemic. She was seeking work opportunities abroad to support her two-year-old son and her parents. Due to restrictions on travel, Gloria decided to go home to her family in Sultan sa Barongis (SSB), Maguindanao. Later on, through the Hygiene Behaviour Change Coalition (HBCC) project, created by Unilever and the UK government, she became one of the Mum's Magic Hands (MMH) Champions.

Before the HBCC project, Gloria was a nutritionist in SSB. The lack of knowledge on proper handwashing and improper disposal of garbage leads to frequent surges of diarrhea and fever cases, particularly among children. A positive change happened when the HBCC project, a Covid-19 response, was implemented in the community. "The project significantly decreased the number of fever cases and eliminated diarrhea cases reported from the 4th quarter of 2020 until now. People learned about proper handwashing and segregation of trash."

Gloria is one of the ten MMH champions in the community. Every MMH session in the community, her confidence in teaching increases. "Before, I was embarrassed to speak in front of a crowd, but through the MMH intervention, I am now encouraged to teach more."

As an MMH champion and a nutritionist, Gloria hopes that women choose to be leaders in the community and share their knowledge. "I am happy with the project because this is the way I can help my community. I hope there is a second part of this project." Gloria is willing to suspend her plans of working abroad to assist her community in having a healthier and safer environment.

We use cookies to provide you with a better service. Carry on browsing if you're happy with this, or find out more.